Up the Florida Coast: Lucaya to Port Canaveral

Up the Florida Coast: Lucaya to Port Canaveral
In what seems ages ago, back at the end of March, we headed from Lucaya, Grand Bahama back over to Florida. We were en route to Charleston, our summer home for SV Banksy--where we are now. The trip up the Florida coast was lovely, and in general, we've had some incredible sailing, friend visits, and lots of time on lovely beaches. This first "Up the Coast" post covers Lucaya to Port Canaveral.

It was hard to leave the Lucaya beaches, but on March 29, in the lovely still darkness of early morning, we left Lucaya via the small but beautiful Bell Channel. We had our underwater lights on, and the crystal clear water of the channel provided one of the oddest, coolest things I’ve seen while we were traveling this way: There were two sharks lying (sleeping?) right next to each other on the bottom of the channel. One had a sucker fish hanging out on top of it. Sleeping sharks to start our trip?! Wonderful and odd. (Wish I'd taken a picture, but didn't catch it in time...that's the theme for this trip.) 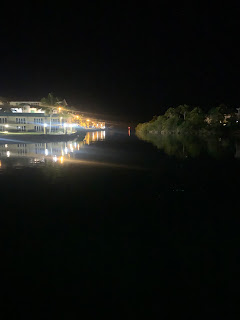 The sea state was quickly bigger than anticipated, big enough that Ryan was even feeling a bit green. But I was feeling absolutely GREAT. I mean, phenomenal. (For real. Thanks Ondansetron + Bonine!)

I took the first watch and played cruise ship dodging games around Freeport. There were so many! Some were moving, some anchored or moored. Some changed status as we got closer. They're so big and bright on the horizon: 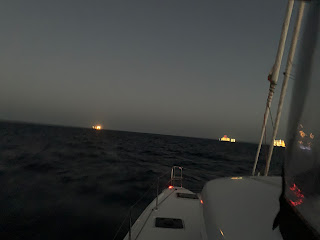 Later the seas calmed and we had a gorgeous day of sailing... just the sort that sticks in your memory: Blue water, blue sky day, with wind to give us one of the nicest sails we had had in a long time. We got to use the code zero (a bigger asymmetric head sail) when the wind got lighter, and the sailing was dreamy and fast--especially while riding the Gulf Stream north. 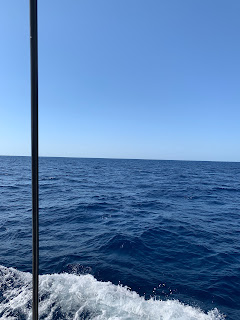 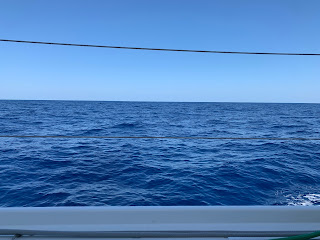 I wish I'd taken more pictures, but we were just enjoying the lovely day. We lazed about. We sailed. We listened to music. Ryan caught a mackerel. We watched another lovely sunset. Most of the sunsets on the ocean are pretty spectacular. 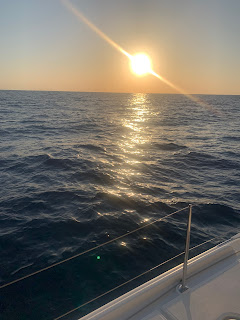 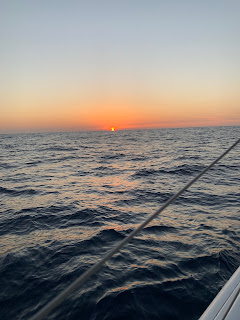 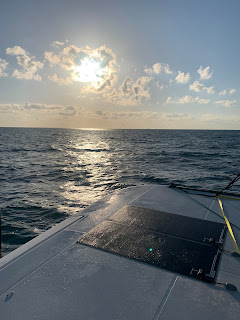 The next morning, we were close to the Port Canaveral channel entrance when we saw funny splashing happening in the distance. (Check out the video on FB or IG.) Turns out we were about to witness our first spinner sharks! Apparently they spin around underwater, eating their way up through a school of fish. They don't bother to try and stop before they reach the surface, so pop out of the water still spinning! Crazy and cool. You can just see the belly of one spinner in this pic: 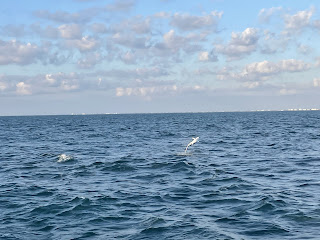 We arrived in Port Canaveral after 28 hours+ of sailing. The next challenge: Getting into a slip with only pylon-separators--a first for us. But a few people on the dock provided helpful advice on how to approach the entry, and Ryan's gotten awesome at maneuvering SV Banksy in tighter situations. I've also gotten better at... lassoing things. :) We got in with no problems. Thanks again for the wonderful support and place to stay, Port Canaveral Yacht Club! We definitely recommend this lovely member-owned spot. 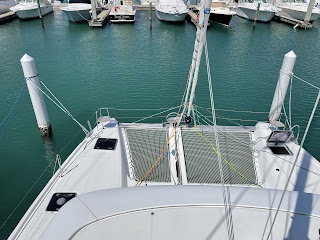 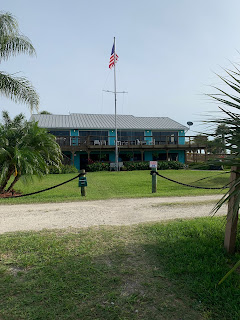 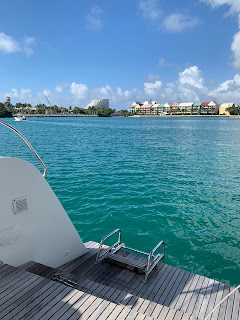 Lucaya Take Two We made it back to The Bahamas! We had a lovely if long day trip (5:10am-1:30am) back to Lucaya yesterday/today from Fort Lauderdale. Ryan has gotten us through customs (only the captain is allowed off the boat) and we are currently waiting for passport control here: Our earlier Lucaya post has more pictures to give you a taste. Especially note the stunning beaches, great for both long walks and swimming. That Blue I know you've heard me talk about this repeatedly: The blue of the water in the Bahamas is just lovely. This next set of pictures shows you a bit more what I mean. It gives you the view I see every time I go up the stairs from our hull. (Owner's hull config has a super nice full-hull bed/office/laundry/bath.) This is an escape hatch (window) in the event the cat flips and we need to get out: The window under the stairs.   Seen here are colors from 1) Fort Lauderdale (not knocking Fort Lauderdale or where we were staying-- you should see the Chesapeak
Read more 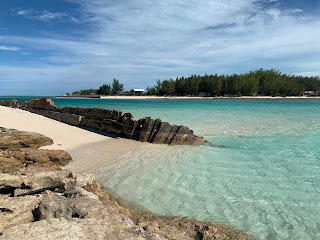 Hello Bimini! (Part of the Covid/Weather/Repairs Loop) Many of you have wondered how we ended up where we've been in The Bahamas (West End, Lucaya, Alice Town) when we had planned to be in the less-populated northern Abacos! Our original plan: Sail from Lake Worth inlet near West Palm... all the way to Spanish Cay or even Green Turtle Cay to check in to the Bahamas. (Likely stopping at Great Sale Cay for a night to anchor and sleep but not get off the boat as we would still be in customs quarantine.) Then enjoy the Abacos, and perhaps if there was time, keep heading further south. Instead, we're currently in (beautiful) Bimini. What actually happened (/is happening) is a route based on Covid, weather, and some needed repairs. Covid requirements in early January when we wanted to cross from Lake Worth included a rapid PCR test within 72 hours/3 days of arrival, filing for a health visa after we had the rapid PCR results and then waiting up to 24 hours for a health visa approval.
Read more